In an effort to reduce lung cancer mortality rates through understanding mechanisms and improved early diagnosis, much research focus has recently been oriented towards extracellular vesicles (EVs). This is both in the context of EV biogenesis and also biomarker potential.

The Exo-spin™ purification system has been identified as superior to the membrane affinity technique. This was described through two major benefits: 1) exosomes do not aggregate; and 2) exosomes are ready to use without further buffer exchange, even in functional downstream applications. Analyses such as particle number and vesicle size have been performed. 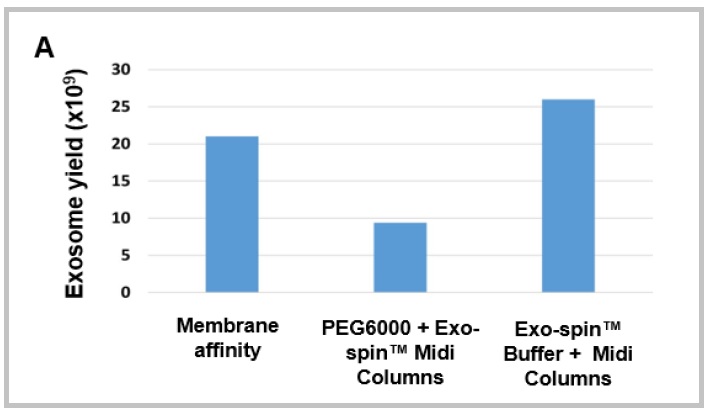 (B) NTA of EV fractions. EV samples were isolated from 10 ml conditioned medium. (1) The overwhelming majority of particles isolated with the Exo-spin™ technology were in the 100-150 nm range, following a narrow size distribution expected for highly pure, high quality exosomes. (2) Vesicles isolated using the membrane affinity method, showed a broad range of particles with the majority in the 200-400 nm region. Blue numbers indicate peak particle sizes.

For a full list of the Exosome Purification Kits, please see here.